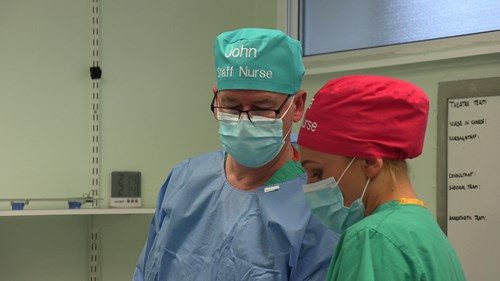 It is nice to know who you are on shift with on any given day isn’t it? But working in a busy operating theatre, it may not always be possible as colleagues change on a day to day basis, with specialist surgeons working only some days and not others, and nurses and operating department technicians being used across multiple operating theatres. So how do you communicate under pressure, with the colleague opposite you, who’s name you don’t know and who’s face will be difficult to see, given a mask, possibly glasses and a head covering?

This was exactly the problem that Lindsay Quinn, Operating Department Practitioner based at Queen Margaret Hospital in Dunfermline, sought to solve when she had the bright idea to put her colleagues names on their theatre hats. The idea, like all the best ideas, was a simple one, but very effective. Badges don’t really work in a theatre environment as these can be obscured easily by PPE or can fall off. But a hat is both required and very visible. This simple innovation enables clinical staff working in theatres to see at a glance the names of those they are working alongside, and perhaps even more importantly, identify their individual role within the theatre team.
The hats also benefit patients too as patients are often disorientated when coming around after sedation. The hats mean that they can have the reassurance of being able to address the staff caring for them by name.

The initiative came about after Lindsay Quinn was tasked with carrying out a quality improvement exercise in her area as part of some additional study. After learning about similar initiatives elsewhere, she sought funding through the Fife Health Charity. Lindsay was successful in her application and was awarded £20,000 from the charity to fund the project.

In total around 450 staff working in Fife’s theatres have now been issued with personalised caps for use during operating procedures. Lindsay Quinn said of the initiative:

“The project started out quite small and we intended just to try the idea in a single theatre. We quickly realised that a really simple little thing like this could benefit all the theatres in Fife and so it quickly grew from there. “We’ve now provided caps to staff working in planned care, obstetrics, orthopaedics, all areas really, and as a clinical team I think you can really see how it improves communication, not only between staff but between ourselves and patients too. I think that’s really important as it’s an anxious time having surgery and so anything we can do to alleviate that anxiety is good for patients.

“On a personal level, it’s been a really satisfying project to be involved with. It’s taken a huge amount of work to get to this stage, from initially speaking with manufacturers to testing the caps to make sure they were suitable, to then gathering the details of the hundreds of staff working in theatres. It’s nice now to be able to see first-hand the benefits it is bringing, both for patients and staff.”
It's great to see how a simple innovation in Fife’s operating theatres is helping to improve communication between our healthcare staff and our patients.

Watch the video below to listen to the team talk more about the project.

People of Fife encouraged to self test for COVID-19

People of Fife encouraged to self test for COVID-19

NHS Fife is providing a series of drop-in clinics at large-scale vaccination venues.

NHS Fife is providing a series of drop-in clinics at large-scale vaccination venues.